The Outlandish Companion (Through the Stones in the UK) is a guide to the first four novels of the Outlander Series. It contains synopses, character guides and other notes and information. It also includes never before published excerpts.

In January 2015, Diana Gabaldon announced that a revised and updated edition of the original Companion would be released on March 31, 2015.[1] The new edition will include most of the original content, though obsolete material will be replaced with new content, such as sections called, "Book to Film: How we Got from There to Here" and "A Brief Account of My Career as a TV Actor". The new sections on the television adaptation will include previously unreleased photographs from STARZ.

US and UK covers, First Printing 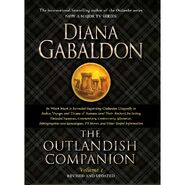