Outlander Wiki
Register
Don't have an account?
Sign In
Advertisement
in: Male characters, Characters in Drums of Autumn, Deceased characters,
and 6 more
English

Bonnet was orphaned at an early age in Sligo, Ireland, and grew up self-sufficient by working as a cabin boy aboard trading ships. When he was seventeen, he found work in Inverness building the foundation of a house, where he was nearly used as a human sacrifice to fulfill an ancient custom. From that point on, he made seafaring his occupation, rather than work on land.[3]

In June of 1767, Stephen Bonnet was to be hanged alongside Gavin Hayes, one of Jamie Fraser's men from Ardsmuir Prison. After Hayes was hanged, Bonnet escaped in the resulting confusion. With nowhere to go, he hid all day in the wagon where the Frasers were keeping Hayes's body until nightfall.

While Jamie arranges to bury his friend, Bonnet reveals himself. Bonnet asks Jamie to help him escape from the town, appealing to Jamie's grief for the loss of Gavin, and Jamie agrees. Jamie hides Bonnet in his wagon, with the fugitive posing as a dead body covered in a tarp. As Jamie leads the wagon out of town, he is questioned by guards, who stab at the tarp to make sure that the body is truly a corpse. The guard stabs Bonnet in the leg, but he doesn't make a sound and Jamie's wagon passes without incident.

At the coast Bonnet returns to his men. Jamie knows that Bonnet likely wasn't a lawful or moral man, and has vague misgivings about helping him escape justice.

Later on, when Jamie and Claire are making their way upriver to Jamie's kin at River Run, Bonnet ambushes their ship, knowing that Jamie and Claire have very valuable gems. He finds the gems and steals them, along with Claire's gold wedding band from her marriage to Frank. Bonnet leaves the ship without injuring or killing anyone, as his way of paying back Jamie's mercy. Jamie curses himself for letting Bonnet escape the noose in the first place.

When Roger Wakefield follows Brianna Randall into the past to 1769, Bonnet is captain of the ship that Roger works on to make his way to the Americas. Bonnet is a hard captain, and when an outbreak of smallpox hits the ship, he doesn't hesitate to throw overboard all who show signs of the sickness. Roger finds a young woman on the ship whose child has a rash that presents similarly to smallpox, and vows to protect her from Bonnet. Bonnet finds out, and recounts to Roger a story of how luck saved him from a ritual killing years ago. Bonnet and Roger toss a coin to decide the fate of the child, and then Roger's own fate. Roger wins both tosses, and as soon as the Gloriana docks, Roger flees Bonnet's company.

Bonnet next appears in a tavern, where Brianna notices that he is in possession of her mother's gold wedding band, which has a distinctive inscription on the inside. He invites her to meet with him aboard his ship. When she meets Bonnet, he takes her to his cabin and rapes her. As 'payment for his pleasure', Bonnet allows Brianna to take her mother's ring.

Sometime after this, Roger finds Bonnet and steals the remaining gems that Bonnet first stole from Claire and Jamie.

In early 1770, Bonnet is arrested for smuggling tea and brandy and is sentenced to death. Prior to his scheduled execution, he is jailed in Cross Creek, and Lord John Grey accompanies Brianna to visit him. Grey waits outside as Brianna confronts the condemned Bonnet, for raping her and also for robbing her parents of their gemstones. Bonnet reveals that he sold one stone to buy his ship and that the other two were stolen. Brianna taunts him by revealing her pregnancy and telling him that he is the father. Bonnet then is aided in an escape attempt by Sergeant Murchison, who was his partner in his smuggling business. The escape attempt is partially thwarted by Brianna when she knocks Murchison unconscious, but not before Murchison has set fuses to ignite the pitch and turpentine stored above Bonnet's cell. Bonnet leaves Murchison to die as the building begins to burn, but at Brianna's insistence, relents and carries out the unconscious Grey. Once they are safely away, Bonnet tells Brianna he has a ship waiting. He asks if she'll go with him; she declines. Before he departs, Bonnet gives Brianna a black diamond "for [the baby's] maintenance."[4]

Jamie Fraser sends word to many of his contacts, including Lord John Grey, seeking any information on the whereabouts of Bonnet. Brianna reads a letter that Lord John wrote in response to Jamie's query, and is angry that her father is still trying to hunt down her rapist.

In March 1771, Bonnet sneaks onto River Run with the aid of an accomplice, who was already there as a guest for Jocasta and Duncan Innes' wedding. Bonnet is briefly spotted standing behind Phillip Wylie by Jamie and Claire Fraser, who are in the shed performing an illegal autopsy. Bonnet escapes by stealing Lucas, the Friesian stallion that Jamie had won off Wylie, leaving Wylie to be captured by Jamie and Roger.

Knowing that Jamie is still trying to hunt down Bonnet, Roger asks him to teach him how to fight with a sword so that Roger may kill Bonnet himself.

In 1772, the Frasers and Mackenzies travel to Wilmington, where the women and children stay while Roger and Jamie go to meet (and attempt to kill) Bonnet at Wylie's Landing.[5] Things do not go as planned; Bonnet, instead of appearing at Wylie's Landing, comes upon Claire with Jemmy near Wilmington. Claire tells Bonnet that Jemmy is her own son, but he doesn't believe her – he knows Jemmy is Brianna's son, and still believes he is the father. Brianna and Marsali along with Germain and wee Joan come upon the scene. Bonnet tells them that Jamie and Roger are already dead.

Bonnet also reveals that he and Lieutenant Wolff are the ones that had attacked Jocasta and Duncan on their wedding day, Wolff having learned of the Frenchman's gold from Dr. Rawlings. The pair had conspired to steal the gold. Wolff killed the slave Betty in order to cover his tracks from his failed attempt on Duncan's life. The confrontation ends as Brianna shoots Bonnet in the groin. He flees, the extent of his injury uncertain and leaving the family unsure if he survived.[6]

In July 1773, Bonnet is spotted by Phaedre near River Run trying to speak with Jemmy, asking the boy who his father is. Phaedre quickly takes Jemmy away from Bonnet and later tells Roger about the encounter.

In August 1774, Claire learns that Dr. Fentiman, a physician in Cross Creek, had performed surgery on a man to remove a testicle that had been injured by gunshot. Fentiman did not know the man's name, but given the time frame and general description of the man, Claire is fairly certain that it was Bonnet.

In August 1775, Brianna MacKenzie is kidnapped from River Run by Neil Forbes and given to Bonnet. The agreement was that she be put on a ship to England. Forbes did this to get her and her family out of the way.

Bonnet, however, has other plans for her, and brings her aboard his own ship. He does not rape her this time, but only because she reveals she is pregnant, and he is afraid of having sex with pregnant women. Instead, he brings aboard a whore and has sex with her in front of Brianna. Unbeknownst to Bonnet, Brianna then makes a deal with the whore to get word to her family that Bonnet is taking her to Ocracoke. Later, Bonnet insists Brianna sleep next to him in bed at night. She comforts him during his nightmares, which reveal his deep fear of death by drowning.[7]

Bonnet then takes Brianna to his house on Ocracoke, where he presents her for sale to prospective buyers. Brianna discovers Phaedre working in the kitchens of Bonnet's house.

Roger and the Frasers encounter Manfred McGillivray and the whore, Hepzibah, whom Brianna had met aboard Bonnet's ship. Based on her information, they hire a fishing boat to take them to Ocracoke, where they search the island for clues of Brianna's whereabouts. Roger finds a stone circle, and a slave ship approaches the island.

Roger and the Frasers succeed in rescuing Brianna and capturing Bonnet. Roger and Jamie give Brianna three choices: she can kill Bonnet herself, they will kill Bonnet, or they will deliver him to the authorities to stand trial. Brianna chooses the third option, expecting that he will be found guilty and hanged.[8]

Bonnet is found guilty and sentenced to death by drowning. Knowing this is his greatest fear, Brianna, accompanied by Roger, takes a boat out to where Bonnet is tied to a post in the harbor at rising tide. As the water reaches his neck, Brianna shoots him in the head.[9]

Bonnet likes to think himself something of a gentleman, but at his core he is as cold and ruthless as one might expect of a hardened criminal. He lacks almost completely in morals and compassion, though when he did think that Jeremiah MacKenzie was his son, he showed some vestiges of compassion in giving Brianna a valuable black diamond, to be used for the child's welfare.

Bonnet had a tall, powerful frame and a barrel chest, his features coarsely handsome and his eyes pale green. He was a few inches shorter than Jamie, with a slightly crooked nose and a small scar by the corner of his mouth. By Claire's assessment, he was the sort of man who attracted women easily.[2] 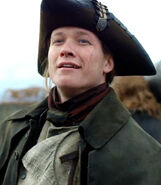