Outlander Wiki
Register
Don't have an account?
Sign In
Advertisement
in: Male characters, Fraser Clan, Characters in Dragonfly in Amber,
and 7 more
English

2
Simon Fraser, 11th Lord Lovat, was the father of Brian Fraser and grandfather of Jamie Fraser. Jamie, at the behest of Charles Stuart, meets with Simon to negotiate sending troops to support the Stuart rebellion.

Simon Fraser, the Old Fox, was the 11th Lord Lovat and a real historical figure. He is known as a traitor and deceiver who always acted out of self interest, but he picked the wrong side in the Jacobite Rising of 1745 and was executed as a traitor, becoming the last man in Britain to be publicly beheaded.

In 1745, Jamie and Claire arrive at Castle Beaufort to ask Lord Lovat to commit his clan to the Jacobite cause. Lord Lovat consults his seer, Maisri, to help come to a decision, but she refuses to tell him what she can see of the future and he throws her out into the hallway.

Jamie speaks hastily to Lord Lovat and he shows him who's boss by having three men hold Jamie down while Young Simon punches him in the stomach. Lord Lovat spends two weeks with Jamie questioning him about Charles Stuart's cause. He then asks Jamie to swear an oath of loyalty to him. When Jamie refuses, Lord Lovat threatens harm to Claire if he doesn't. Jamie tells Lord Lovat that no man would dare harm Claire because she is a white lady like Dame Aliset. Lord Lovat is shocked into silence and Jamie throws his false teeth on the fire.

Lord Lovat continues to prevaricate about committing to the Jacobite cause and is at odds with his son, Young Simon, who is itching to go. Claire diagnoses Lord Lovat as suffering from prostatitis. Lord Lovat seizes upon Claire's diagnosis of prostatitis as a way of remaining non-committal with regards to the Jacobite rebellion. He sends his son, Young Simon with men from Clan Fraser to join Charles Stuart, along with a letter explaining that he is too ill to attend himself and a gift of a gold and sterling picnic set.

Lord Lovat tells Charles Stuart that he is sending him 200 men, but he sends only 170 from Beauly and surreptitiously includes Jamie's 30 Lallybroch men in his regiment without Jamie's knowledge. If Charles Stuart wins then Lord Lovat can claim Lallybroch as his land because he raised men from the estate to answer Charles Stuart's call.

In 1747, Simon is beheaded on Tower Hill after being tried for treason.

Jamie described him as a terrible auld monster.[1]

Claire describes him as a squat-bodied elderly man with shoulders nearly as broad as Jamie's. He held his back like a ramrod, with gray hair, and wore false teeth.[1] At the time that Claire met Lord Lovat he was in his seventies.[2] 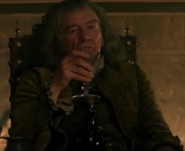