Outlander Wiki
Register
Don't have an account?
Sign In
Advertisement
in: Narrated by Davina Porter, Narrated by Geraldine James, Books,
and 2 more
English

The Exile: An Outlander Graphic Novel

Outlander (Cross Stitch in the UK) is the first in the Outlander Series of novels by Diana Gabaldon. The book focuses on two main characters, Claire Randall and Jamie Fraser, and takes place in Scotland in the 18th and 20th centuries.

While Outlander follows a few basic tropes of the romance novel, it deviates from them just as often, and could be accurately described as a work of historical fiction, science fiction, and adventure, among other genres. Diana Gabaldon has asserted that the series as whole is the story of a long, successful marriage, so while Outlander certainly involves the typical courtship story of a romance novel, it is the only installment of the series to do so.

The story of Claire and Jamie continues with eight sequels, a handful of companion stories, and a spin-off series.

It's the spring of 1945[2], and Claire Randall, an English ex-army nurse, has come to the Scottish Highlands on a second honeymoon with her husband, Frank, from whom she's been separated during the war. While Frank spends his time researching his ancestors, Claire pursues an interest in botany. One of the locals agrees to show her around Inverness' plant life, and he brings her to an ancient circle of standing stones. When she tells Frank about the stones, he is intrigued, saying he had heard that the circle is still in use by a local group of women who celebrate the "old ways" there. In the dawn of the ancient Feast of Beltane, Claire and Frank creep up to the circle to see the women dancing and chanting, calling down the sun. The couple steal away unseen but later Claire returns to the circle to get a closer look at an unusual plant she had seen growing there. This time, however, Claire is overcome by a strange buzzing sound that seems to be coming from the large cleft stone in the circle. When she touches it, she is enveloped in a sudden vortex of noise and confusion.

Disoriented and half-conscious, she finds herself on the hill outside the circle and slowly makes her way down, only to find what she assumes is a film shoot in progress at the bottom: kilted Scotsmen dashing about, being pursued by red-coated British soldiers. Claire carefully skirts the scene, so as not to ruin the shot, and makes her way through the woods until she stumbles into a man in the costume of an eighteenth-century English army officer. This doesn't disturb her as much as the man's striking resemblance to her husband, Frank.

The man introduces himself as Captain Jonathan Randall – the name of Frank's ancestor, the notorious "Black Jack" Randall of whom Frank had often told her. While very similar in appearance to Claire's twentieth century husband, Jack Randall unfortunately does not share his descendant's mild-mannered personality – Black Jack earned his nickname through force of character and deed, and makes short work of harassing and assaulting Claire.

Claire is rescued from Black Jack's clutches by one of the Scotsmen she had seen earlier, who takes her to the cottage where his fellows are hiding, waiting for darkness in order to escape. One of the men, Jamie, has been wounded and Claire treats his wound as best as she can, all while trying to come to terms with the apparent truth of where – and when – she is. Bemused not only by Claire's peculiar attire – fashionable in the 1940s, Claire's dress more closely resembles 18th-century undergarments – but by the sheer impossibility of an Englishwoman wandering the Highlands unaccompanied, the Scotsmen decide to take her with them when they decamp under the cover of darkness. On the road, their travel is interrupted by a brief skirmish with some more redcoats, and another stop to treat Jamie's latest wound.

Arriving at dawn at Castle Leoch, seat of the Clan MacKenzie, Claire meets the clan's laird, Colum MacKenzie. A courtly man whose legs are badly deformed, Colum is both intrigued and suspicious of Claire. He listens politely to her story of having been beset by robbers, but he plainly has reservations and ensures that Claire remain at the castle until more about her identity can be determined.

The Scots see Claire as a sassenach – an English person, an outsider to Scottish Highland culture – though she earns their respect through her skills as a healer. After the clan Gathering, Dougal takes both Claire and Jamie along for the yearly rent collection on the MacKenzie lands.

Jack Randall wishes to talk again to Claire and seeks her out. After an argument between Dougal and Jack over Jack's mistreatment of Claire, Dougal refuses on Jack's further request to let Claire be questioned. He is informed by Ned Gowan, the clan's lawyer that the only solution is to make her a Scotswomen by marriage. Dougal tells her to wed Jamie, yet suggests other men when she refuses. Claire tells Dougal she can't marry anyone, but admits she isn't married, struggling internally with the fact that technically Frank hasn't even been born yet. Dougal ignores her. She gives in and marries Jamie in the same church where she married Frank. After the ceremony, Claire is touched to learn that Jamie insisted on finding her a decent gown to marry in, and grateful that he demanded a private room in which to consummate their marriage. Still hesitant about fully committing to this plan to protect her own life, Claire draws Jamie in to telling her about his family, and they talk for several hours. Eventually, after consuming a large amount of wine, Claire gives in to the inevitable and she and Jamie make love. Although she is very much attracted to Jamie, and they enjoy a strong intimacy over the following days, Claire begins to feel guilty both for her betrayal of Frank, as well as the necessity of deceiving Jamie and planning to leave him.

The level of suspicion Claire endured before her marriage to Jamie has lessened considerably upon their return to Castle Leoch, but her ignorance of local superstition and a young woman's jealousy towards her lead to a charge of witchcraft. Thrown into the thieves' hole with another accused witch, Geillis Duncan, Claire endures a long and eventually life-threatening interrogation until Jamie rescues her. Just before her escape, she notices that Geillis has a smallpox vaccination scar on her arm, a sure indication that she, too, is from the future.

When Jamie asks her to explain everything, Claire initially insists that he won't believe her, and he might as well just call her a witch for all the sense that the truth will make to him. Still, Claire breaks down and confesses her whole story to Jamie. Shocked by Claire's explanation, he takes her to the stone circle and tells her to return to Frank – seeing for himself that Claire is telling the truth. Jamie leaves her there to decide if she wants to return to Frank or stay with him. He is overjoyed with her decision to stay and he takes her to his home, Lallybroch, but their happiness doesn't last.

Jamie has a price on his head and is betrayed by Ronald MacNab, one of his tenants. Jamie is held at Wentworth Prison and sentenced to hang. Sadistic Jack Randall is also at Wentworth and takes the opportunity to torture Jamie. Claire breaks in to free Jamie, but is caught by Randall. Jamie will allow Jack to torture him if he frees Claire. Jack agrees and in revenge Claire tells Jack she is a witch cursing him with the gift of knowledge that he will marry and have a son but will die before the child's born, giving him the date of his death.

Aided by Sir Marcus MacRannoch – a former suitor of Jamie's mother, Ellen MacKenzie Fraser – Claire and Jamie's relatives and men employed by Sir Marcus rescue Jamie. She patches him up and and they escape to the Abbey of Ste. Anne de Beaupré in France, where Jamie's uncle Alexander Fraser is abbot. At Ste. Anne's, Claire tries healing Jamie but discovers broken bones are simple compared to repairing the damage done to his spirit. Claire also learns more about her faith – she was christened a Catholic but not raised as one – and receives absolution from a friendly monk. He describes her as a shipwrecked traveler, forced to survive in a strange land as best she can. He describes her marriages as something she should leave in God's hand as nothing can be done about them.

After Claire uses unorthodox methods to break Jamie out of his tormented fever dreams, Jamie tells Claire that his life is hers, that she should decide whether they stay in France, go to Italy, or even back to Scotland. Claire tells Jamie what she knows about Charles Stuart and the Rising, and they agree to go to Paris to see if they can influence the Bonnie Prince there. At last as they emerge from the healing waters of a sacred hot spring under the Abbey, and Claire reveals that she is pregnant with their first child.

The first novel in the Outlander series was adapted for television, whose first season aired from August 2014 to May 2015. It consisted of sixteen hour-long episodes.

On 1 August 2010, a CD song cycle telling the story of the first book in the series was released under the title "Outlander The Musical". The 14 songs were written by Kevin Walsh (music) and Mike Gibb (lyrics) with the words for one of the tracks being provided by author Diana Gabaldon. The CD has been highly successful, especially in America, Canada and Germany, and a libretto for a full scale stage musical is currently under consideration by a number of theatres.[3] The writing team of Walsh and Gibb earlier produced the work "Clarinda the Musical"[4] while playwright Mike Gibb has produced a string of plays and musical plays on Scottish themes.[5] 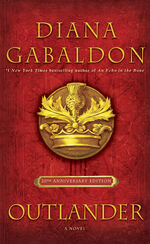 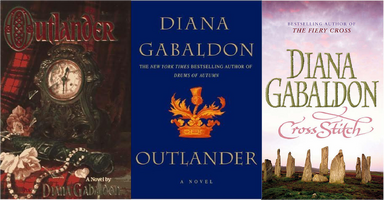 US hardback, US trade paperback, and UK paperback 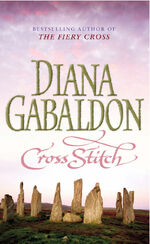 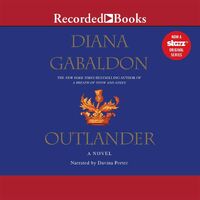 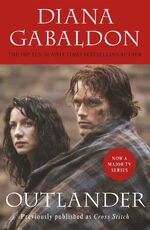 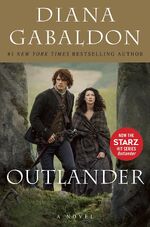 The Exile: An Outlander Graphic Novel