Outlander is a Starz Original Series based on the Outlander series of books by Diana Gabaldon. The television series is produced by Tall Ship Productions, Story Mining & Supply Company and Left Bank Pictures in association with Sony Pictures Television. Filming for Season One began in Scotland in Fall 2013.[1] The show premiered on STARZ Saturday, August 9, 2014 at 9pm ET/PT.

On June 1, 2016, STARZ announced that Outlander would return for a third and fourth season, based on the respective novels in the book series chronology.[2] The upcoming third season will premiere September 10, 2017.

Outlander follows the story of Claire Randall, a married combat nurse from 1945 who is mysteriously swept back in time to 1743, where she is immediately thrown into an unknown world where her life is threatened. When she is forced to marry Jamie, a chivalrous and romantic young Scottish warrior, a passionate affair is ignited that tears Claire's heart between two vastly different men in two irreconcilable lives. The "Outlander" series spins the genres of romance, science fiction, history, and adventure into one epic tale.[3]

"Claire is a modern woman of 1945, a strong-willed and quick-witted former British Army nurse who served on the front lines in WWII. While on a second honeymoon in Scotland with her husband Frank, she is mysteriously swept back in time to the year 1743. Upon her arrival, she is immediately thrown into an unknown world where her freedom and her life are threatened. When she is forced to marry Jamie Fraser, a chivalrous and romantic young Scottish warrior, a passionate affair is ignited that tears Claire’s heart between two vastly different men in two irreconcilable lives.."

"Armed with sheer grit and enduring strength, Jamie is a strapping young Scottish Highlander with a complicated past and a disarming sense of humor. When Claire Randall, a married combat nurse from 1945, is mysteriously swept back in time to 1743, Jamie is forced to marry her to save her life. Intelligent, principled and, by 18th century standards, educated and worldly, Jamie has a tenderness and compassion that stand out in contrast to his contemporaries. A natural leader of men, he has no political ambitions or desire for battlefield glories. Instead, he wishes to remove the price on his head and return to his family’s ancestral farm."

"Claire's beloved husband Frank is an intellectual and an academic. He served in British Intelligence section MI6 during the war, and was responsible for sending men on dangerous missions, some of whom never returned. With the war now over, he's looking forward to a new career as a historian at Oxford when his wife mysteriously disappears in the Highlands. "

"A Captain in the English Army back in 1743, Jack has been posted in Scotland during a time when rebellion is in the air. As an officer in an occupying army, he's seen and done terrible and horrific things in the undeclared war in the Highlands. Jack is capable of monstrous acts, which he justifies to himself as being necessary to enforce British rule. He's also a sadist who finds joy in the torment of others – a secret side to himself that he loathes, but cannot escape. Jack also has an unhealthy obsession with both Claire and Jamie."

"A skilled and experienced warrior, Dougal is the War Chieftain of Clan MacKenzie. His older brother Colum is the ruling Laird, but Dougal is his loyal right hand and the true muscle. He is courageous on the battlefield and is feared by many; the kind of man who will get what he wants, no matter what (or who) stands in his way. Though an artful tactician, he sometimes lets his temper and impetuous nature get the better of him. Unlike his brother, Dougal secretly supports the rebel Jacobite cause against the British, and works to raise funds to restore a Scottish King."

"The Laird of the MacKenzie clan, Colum is Jamie's maternal uncle and brother to Dougal. Colum suffers from Toulouse-Lautrec Syndrome, a degenerative disease that renders his legs immobile at times, and fills his days with a great amount of pain. Unable to rule by brawn, he must rely on his cunning and intellect to lead his clan. Not surprisingly, there is a quiet sadness about him, as he must rely on his brother Dougal to be his enforcer. But above all, he is insightful and stern; a strong leader who secretly fears for the future of his clan and its leadership."

"Mysterious and dark, like a vulture lurking in the background, Murtagh dutifully watches over his godson Jamie. Although a reserved man, he’s a very loyal godfather, and lives his life by a strict code. And he’s more than happy to let his reputation, and if need be, his fists do the talking. Like his fellow clansmen, he is skeptical of Claire at first. But he eventually warms to her because, as always, he’ll do whatever is best for young Jamie."

"The wife of the procurator fiscal and a good friend to Claire, Geillis' advanced knowledge of herbs and plants cause many to believe she is a witch. Geillis is a master manipulator, able to get her husband – among others - to bend to her will. She is also smart, sexual, and mysterious – the kind of character you know you can't trust, yet who continues to draw you in."

"A loyal member of Clan MacKenzie; Jamie's second cousin. Rupert is an angler who is always looking for opportunities - he just can't stand to pass up a good raid. He’s also known as a bit of a sex fiend. Rupert is Dougal's right hand man; Dougal has power and Rupert wishes he did as well. Rupert is happy to cast a watchful eye over Claire and report back to Dougal, but at the same time it's nothing personal; Claire is just a means to an end for him, a way to win points with Dougal."

"Another member of Clan MacKenzie, Angus is a hard drinker who's always looking for a fight. Although less verbal than Rupert, Angus has no problem speaking up when needed, especially if it's about "those damn English!" His hatred for the Brits is palpable, and as far as he's concerned Claire can go right back where she came from – dead or alive. Rarely seen without a bottle in his hand, Angus is nonetheless an extremely skilled fighter, and a loyal clansman, making him an asset to both Colum and Dougal."

"Jamie's older sister, she shares many of the same strong characteristics of her brother. Stubborn and quick-tempered, Jenny is also smart, experienced, and skilled, running Lallybroch (the Fraser ancestral home) when Jamie is away. Jenny is married to Ian Murray, they have one child (Wee Jamie) and a second child on the way."

"A quirky lawyer from Edinburgh with a taste for adventure. Ned has worked for clan MacKenzie for years, beginning with Dougal and Colum’s father, then playing legal aid to Colum when he took over as clan Laird. At first Claire welcomes this chatty addition, glad to have someone to talk to. But it quickly becomes evident that Ned is subtly trying to poke holes in Claire’s story. Charming and cunning at the same time, this barrister is affable enough, but remains loyal to his clan."

"Young and skittish, Willie is a member of our Highlander group who's always trying to prove himself. Loyal and always with the best of intentions – if Dougal's the alpha wolf, Willie's the omega and bottom of the hierarchy."

"Jenny's husband and Jamie's best friend since childhood. Ian lost part of his leg during combat in France but that hasn't held him back in his life. He is very close to his wife and best friend and welcomes Claire into the family."

"This quick-witted woman is the glue that holds Castle Leoch together. Dry, sarcastic, and never one to hold her tongue, Mrs. Fitz is the first one up in the morning and the last one to go to bed at night – her work is never done."

"A young girl of 16 who is attracted to Jamie, Laoghaire is blonde and fair, with the kind of natural, girl-next-door beauty that could get you in trouble. At first she seems shy, harmless, mousey even, but eventually we see her vengeful side."

"This amateur historian and genealogist is Frank's advisor in 1945. He is also the vicar of an Inverness parish, and plays an important role in the lives of both Claire and Frank."

"Reverend Wakefield's druid housekeeper. A dramatic woman with an eye for the unknown, including reading tea leaves. She predicts Claire's "love of two men.""

"Seen in 1945, this easy-going woman is the owner/manager of the bed and breakfast Frank and Claire stay at after the war. She is nosy to a fault, making everything her business, but she is also extremely kind and welcoming to both Claire and Frank."

"Handsome with red hair, Hamish is the son and heir to Laird Colum MacKenzie; although rumors abound that he may actually be another man's son. He is rambunctious and spirited, with a child's understanding of the power Colum has – power that one day could very well be his."

"Letitia is the wife of Clan MacKenzie's Laird Colum MacKenzie, and mother to Hamish. As the spouse of the most powerful member of the clan, Letitia plays the role of both matriarch and caring mother. A strong woman in her own right – the type of powerful ally Claire, or anyone, would love to have."

"This squat, powerful man is the "Master of Horse" at Castle Leoch. A bit gruff, and definitely a man"s man, Alec shows Jamie the lay of the land at Castle Leoch's stables."

"Claire's "Uncle Lamb"; an archeologist who raised Claire in various locations around the world. He was a large influence in Claire's life, shaping her into a strong, independent, competent woman from a young age."

"The Duke is about as opulent and flamboyant as they come in the 18th century. With a propensity for all things beautiful, the Duke rarely hears the word no. We learn, like many men of power during this time, he has his hands in a few different cookie jars."

"This cranky, set-in-his-ways priest from Cranesmuir accuses Claire of witchcraft. He appears hell-bent on sending Claire, and her "evil ways" packing."

Sing me a song of a lass that is gone,

Say, could that lass be I?

Merry of soul she sailed on a day

Over the sea to Skye.

Billow and breeze, islands and seas,

Mountains of rain and sun,

All that was me is gone.

Sing me a song of a lass that is gone,

Say, could that lass be I?

Merry of soul she sailed on a day

Over the sea to Skye. 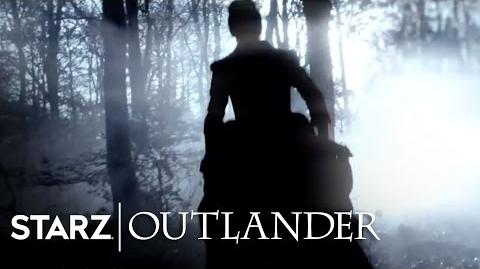 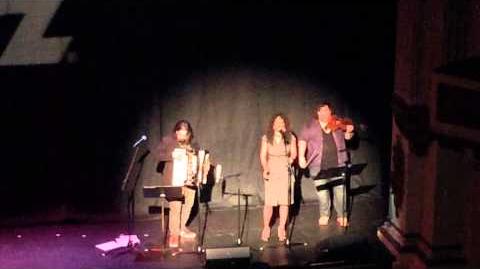 Live performance of the theme from the new "Outlander" TV show, "The Skye Boat Song" 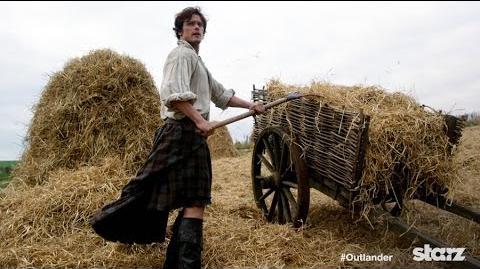 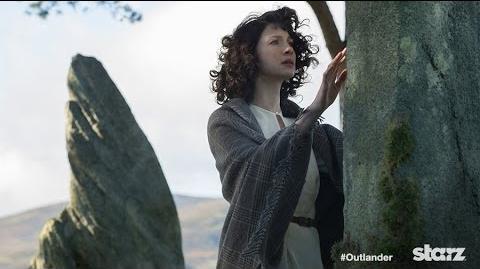 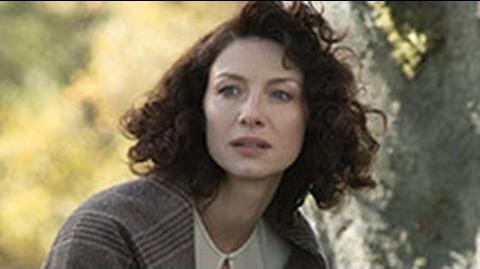