Outlander Wiki
Register
Don't have an account?
Sign In
Advertisement
in: Episodes, Season 3 episodes, Written by Toni Graphia,
and 2 more

Of Lost Things is the fourth episode of Season Three and thirty-third episode overall of the Outlander television series.

While serving as groomsman at the aristocratic estate of Helwater, Jamie is reluctantly pulled into the intrigue of a noble British family. In 1968 Scotland, Claire, Brianna and Roger struggle to trace Jamie's whereabouts in history, leaving Claire to wonder if they will ever find him again.

The episode opens with Claire, Brianna and Roger poring over 18th century ledgers to try and find where Jamie went after Culloden. They discover record of him at Ardsmuir Prison, however they discover that Ardsmuir closed, and cannot find any record of his transfer. However, they are able to find a library in Edinburgh that have a large amount of ship records

Back in Jamie's timeline, he is adjusting to his new life working at Helwater as a horse groom. He becomes well liked and respected by the fellow servants and the noble Dunsany family he serves. Lady Geneva Dunsany is known by those in the household as being very hard to deal with; the stablehands all draw straws whenever she needs to go on a ride to see who has to accompany her. However, as time passes, Lady Geneva becomes infatuated with Jamie and demands that he be the one to accompany her one day, despite the drawing of the straws. Lady Geneva proves to be as difficult as she seems and pretends to fall unconscious from her horse, and in response Jamie drops her in the mud. Later on, she comes to him, and blackmails him to come to her bedroom that night with the knowledge of his status as "Red Jamie," something that would prompt her mother Lady Louisa to revoke his parole. She explains that the Earl of Ellesmere is to be her husband in just a few days time, but he is old enough to be her grandfather, and she has no desire to sleep with him. Jamie agrees, under duress, and the two have sex. Geneva goes through with her wedding and moves to the Ellesmere estate. However, what no one knows is that she is pregnant, and the Earl of Ellesmere cannot be the father as he is impotent. The Dunsany family is called to the estate for the delivery, however due to hemorrhaging Geneva dies after the baby boy is born. Isobel, Geneva's sister, accosts Jamie because she knows he's the real father as Geneva told her about their night together. There is a commotion, however, and Jamie runs up the stairs to see the Earl holding his infant son at knife point, and raving about how the baby can't be his and must be a bastard. After accusing Lord Dunsany of fathering the child, Lord Dunsany pulls his gun on him. Jamie intervenes and takes the gun, and when he approaches the Earl to take the knife, the Earl moves to stab the baby, so Jamie shoots him.

Moving back to 1968, Claire, Roger and Brianna find what may be ship records to indicate where Jamie went, however, Claire realizes the dates are wrong and it can't be. Upset at the setback, and reminded of Mrs. Graham's words after her granddaughter returns the pearls Jamie gave to Claire as a wedding gift that Claire had in turn given to Mrs. Graham when she returned to the 1940's, Claire declared that she was done chasing a ghost. She and Brianna go back to Boston, so that they can try to move on with their lives.

Moving back to Jamie's timeline, Jamie's infant son, named William (or "Willie") by Isobel, is being well cared for, and no one but Isobel knows it's his son. Lady Louisa approaches him and tells him that she is indebted to him for saving her grandson and tells him that the coroner's investigation came back as "death by misadventure", sparing Jamie from likely execution over killing a nobleman. She also admits she knows that he is a Jacobite, and despite the pain she feels knowing the Jacobite rebellion was responsible for her son's death, she respects Jamie and offers to have her husband use his influence in London to get Jamie a full pardon so that he can return home to Lallybroch. However, Jamie declines, using the excuse that he knows times are hard and he wants to continue sending his stipend to his sister while he works there. In truth, Jamie wants to stay close to Willie, as he wants to be part of his son's life. Lady Louisa tells him that he can change his mind at any time, and he need only ask.

The years pass and Jamie is active in Willie's life. Lady Louisa remarks to her friend that Jamie and Willie spend so much time together, they're almost starting to look alike. Even Jamie sees it, and he knows that it's just a matter of time before Willie will see it as well. On Lord John Grey's last visit to Helwater to check in on Jamie's well-being, Jamie appeals to him to watch over Willie, offering his body to him as he knows that John Grey has fallen in love with him. Lord Grey declines, and shares the news that he will in fact become Willie's step-father as he is marrying Lady Isobel. After a final farewell, giving Willie the gift of a carved wooden snake not unlike the one he received as a child, Jamie leaves for Scotland, a free man.

"The Art of Seduction" – Bear McCreary 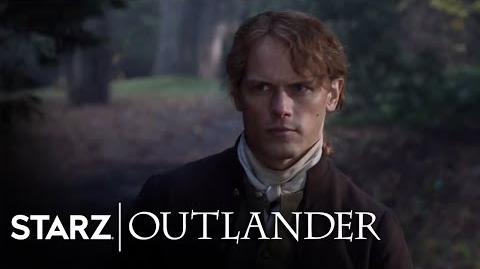 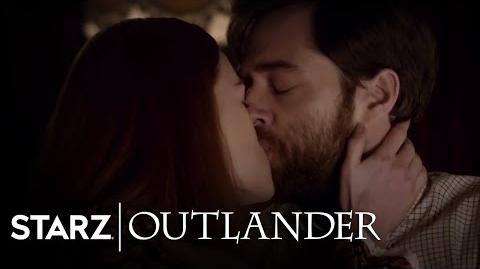 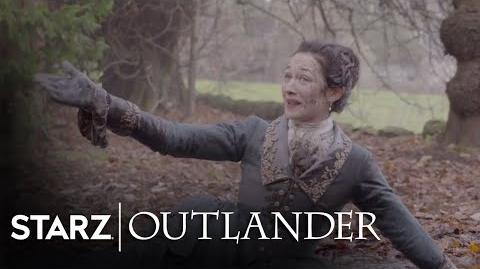 Outlander Inside the World of Outlander Season 3, Episode 4 STARZ