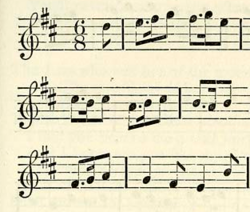 Music plays an important role throughout the Outlander novels and television series. Many of these songs are performed in the books by Roger MacKenzie, who earns the nickname a Smeòraich, meaning "song thrush" in the Gaelic.

Lord John and the Haunted Soldier

In the TV series, music director Bear McCreary selects many traditional Scottish tunes to include in various episodes.