View source
watch 01:04
Who is Marsali Fraser?
Do you like this video?
Play Sound

Marsali MacKimmie Fraser is the eldest daughter of Laoghaire MacKenzie and Simon MacKimmie, and the wife of Fergus Fraser.

Marsali MacKimmie was born the eldest daughter of Laoghaire and Simon MacKimmie. A few years later, her sister Joan was born. They lived at Balriggan. As an adult, Marsali recalls that Simon[5] was short-tempered and violent, and had on at least one occasion slapped her face when she wouldn't stop crying. When Laoghaire had retaliated, Simon pushed her so hard that she fell against the hearth and hit her face on the chimney.[6]

At Hogmanay, Marsali told Fergus that she loved him, and Fergus admitted he loved her too, but he knew that Laoghaire would never agree to the match. Marsali, assuming that he was referring to the fact that he is French and missing a hand, assured him that those things don't matter, but Fergus explains that Laoghaire wouldn't approve because of his past. He confessed to her that he was born in a brothel and worked as a pickpocket before Jamie took him under his wing.

Fergus told Marsali that he wouldn't see her anymore, but Marsali was determined and their relationship continued. When Marsali told Laoghaire about her love for Fergus, Laoghaire fulfilled Fergus's prophecy, telling her daughter that Fergus would do terrible things to her because his mother was a whore and he grew up in a whorehouse.

Marsali accompanies her mother and sister to Lallybroch after Jenny Murray sends for them, and happens upon Jamie and Claire Fraser making love to one another in an upstairs bedroom.

Fergus in one moment refers obliquely to Marsali when he speaks to Claire about having a girl he loves, though he cannot marry her because her mother would disapprove of him. When Jamie, Claire and Fergus intend to travel by ship to the West Indies to rescue Young Ian from pirates, Fergus helps Marsali aboard the ship at the last possible moment, so that Jamie cannot put her back ashore. They explain to Jamie that they are handfast, and Marsali resists all of Jamie's suggestions for sending her home. Ultimately, though reluctantly, Jamie agrees to let Marsali come, on the condition that she sleep in a separate cabin from Fergus until they are wed, and that they are married by a Catholic priest in a proper ceremony.

Marsali shares a cabin with Claire on board the Artemis. Because of the negative stories she has heard about Claire during her childhood, Marsali is at first spiteful and mean when speaking to her, thinking of her as a witch and a harlot. Gradually, however, during their journey Marsali sees a side of Claire different to what her mother would always tell her, and begins to warm to her. Eventually Marsali tolerates Claire enough to seek her out on the ship and ask her for anything to prevent a child from being conceived. She admits to Claire that she is afraid of becoming with child, because she believes, having observed her mother's interactions with Jamie, that children would negatively affect her relationship with Fergus.

Soon after, Claire is taken aboard the Porpoise to help with an outbreak of illness among its crew, and after the ship sails away with her, Jamie leaves the Artemis to go after her. Marsali, Fergus and Mr. Willoughby are left on board the ship with its crew. When a storm hits the Artemis (the very same storm which Claire on the Porpoise encounters), the ship is dragged a long way off its charted course by the huge gusts of wind. In the midst of this it is forced over a large reef, which tears a sizeable hole in its bottom. Despite this being a severe wound, it stays afloat until, three hundred yards from the shore, it is swamped by a huge wave which causes the ship to suddenly heel over. Once the ship runs aground Marsali and Fergus collect the bodies of Captain Raines and other crew members who had been thrown overboard and drowned during the freak accident, and give them a decent burial. Marsali sprinkles some holy water from a bottle which Jamie had bought for her in Notre Dame in Paris, and says a few prayers for the deceased men.

A short time later Marsali and Fergus are reunited with Claire. They explain the past days' events to her. After Claire realises Jamie's absence all three of them begin to wonder where Jamie is, as each had thought that he was with the other. Though worried for him, Claire, Fergus and Marsali begin to work toward repairing the Artemis back to its normal sail-worthy state. As a distraction, Claire and Marsali go to see Father Fogden, where Marsali charms him by recalling and mixing for him a Scottish receipt for a sheep-dip guaranteed to destroy ticks.

Marsali, along with Claire and Fergus, is shocked to see Jamie return leading a band of French soldiers, who help with the repairing of the Artemis. During this time Marsali and Fergus are wed by Father Fogden, and with Claire, Jamie, and Mr Willoughby as witnesses. As soon as the ship is sail-worthy again, the group leaves the island and eventually makes their way to Jamaica. There, Marsali attends the reception in the governor's mansion to welcome the new governor, Lord John Grey, to the island, and witnesses the aftermath of the murder of Mina Alcott.

Marsali stays with Fergus on Jamaica while Claire, Jamie, Lawrence Stern, and Jamie's smugglers sail to Abandawe to rescue Ian from Geillis Duncan.

While Fergus sails to Georgia to meet up with Claire and Jamie, Marsali stays behind on Jamaica because of her advancing pregnancy. In July 1767, Fergus leaves North Carolina to fetch Marsali and their first-born child Germain from Jamaica. They come to Fraser's Ridge in the summer of 1768.

In September 1770, Marsali gives birth to their second child, a daughter named Joan.

In October 1770, Marsali travels with Fergus, Germain and infant Joan with the rest of the extended family from Fraser's Ridge to the Gathering at Mount Helicon.

During the Gathering, Germain and Joan are baptized in secret, as the priest was under arrest.

In May of 1772, Marsali gives birth to a second daughter, Félicité.

In October 1773, Marsali and Claire are attacked while tending the malting shed. Claire is abducted while Marsali is left unconscious near the burning shed. Later in the month, Marsali gives birth to her fourth child, a boy named Henri-Christian, who has dwarfism. Some of the residents of Fraser's Ridge believe that the child's condition is a punishment for his parents' sins, and make no secret of their superstitions.

In September 1774, Claire, Brianna, Marsali, and Lizzie find the MacNeill family in dire straits, struck by a devastating illness. As the same illness strikes other families across the Ridge, Claire tends to them as she can, while Roger sees to burying the ones that succumb.

By October, Marsali and Fergus move from Fraser's Ridge to New Bern, where they take over a vacant printing shop and start publishing a weekly newspaper titled L'Oignon-Intelligencer.

In 1777, after Fergus is attacked in New Bern, the family moves to Philadelphia.

In March 1778, Laoghaire receives a letter from Marsali, in which she begs that her mother will convince Claire to return to Philadelphia, as Henri-Christian's chronic tonsillitis and adenoiditis has become life-threatening.

Claire and Young Ian arrive from Scotland in April. While Ian sets off to find Rachel Hunter, Claire performs the life-saving surgery on Henri-Christian.

Following news that Jamie and Jenny died at sea, Claire comes under suspicion by Captain Richardson. To protect not just Claire but Fergus and his family, Lord John Grey marries Claire.

In June, Marsali and her daughters Joan and Félicité think they've seen a ghost when late one night Jamie and Jenny come knocking at their door. They then explain that they'd been thought dead, and how Lord John had married Claire.

In September 1778, Fergus and Marsali receive threats. On September 18, their Philadelphian printshop burns down and their youngest son, Henri-Christian, dies while trying to escape the flames.

In late November, Fergus and his family arrive in Savannah. A month later, the British army invades the city, making it no longer safe for Fergus to resume the publication of L'Oignon-Intelligencer.

In early 1779, pregnant Marsali, Fergus and their daughters Joan and Félicité settle in Wilmington. Their eldest son, Germain, returns to Fraser's Ridge with his grandparents, Jamie and Claire, as Fergus and Marsali think that it is dangerous for a boy Germain's age to live in a large city in time of war.

Marsali has a quiet demeanor but underneath lies an extremely determined and strong personality.

Marsali is described to have long flaxen hair and big blue eyes.[7] 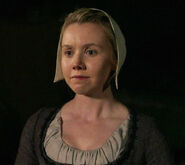