Outlander Wiki
Register
Don't have an account?
Sign In
Advertisement
in: Female characters, Scottish characters, Characters in Drums of Autumn,
and 10 more
English

4 • 5
Lizzie Wemyss Beardsley is the daughter of Joseph Wemyss and wife of both Josiah and Keziah Beardsley. She traveled to America from Scotland with Brianna Fraser as a handmaid and bondservant, and eventually settles on Fraser's Ridge.

Lizzie's father, Joseph Wemyss was a bookkeeper in Scotland. Early in her life her mother died and it was just she and her father. This created a close bond between the father/daughter pair. They were happy, at least to the extent they could be before their family's circumstances obliged her father to sell himself and her into indentured servitude.[2] He sold her as an indentured servant to Brianna Fraser in order to save her from being indentured to a man who would make her his concubine.

On July 4, 1769, Lizzie sails as handmaiden to Brianna aboard the Phillip Alonzo from Inverness, bound for Charleston, South Carolina.

During the voyage, Lizzie contracts malaria and Brianna worries about her recurring attacks of fever. In early September, they arrive in Wilmington. Lizzie sees that Brianna is disturbed by Roger MacKenzie's appearance, and later upset, after being gone all night. Lizzie mistakenly assumes that MacKenzie forced himself on Brianna. In October, Lizzie tells Jamie and Young Ian that a man named MacKenzie, who she mistakenly believes assaulted Brianna in Wilmington, is making his way up the mountain.

After the truth is revealed about what happened and Roger returns from his ordeal at the hands of the Mohawk, Lizzie is so filled with remorse that she attempts to make amends to him in every way she can think of.

At the Gathering at Mount Helicon, Lizzie starts her first menstrual cycle. Back on the Ridge, she courts the attentions of the local young men during the Hogmanay celebration, and stays by Josiah and Keziah Beardsley as they have their tonsils removed.

Her father, Joseph, asks Jamie to help him negotiate a betrothal between Lizzie and Manfred McGillivray.

In June 1774, Lizzie's betrothed Manfred McGillivray confesses to Claire that he may have gotten "the French disease" from a whore. Before they can figure out what to do about him regarding his marriage to Lizzie, Manfred flees, terminating the betrothal.

In September 1774, Jamie receives a letter from Lord John Grey regarding Bobby Higgins's proposal of marriage to Lizzie. Jamie arranges a meeting with Joseph Wemyss and Bobby Higgins regarding Lizzie, but Joseph rejects Bobby's proposal.

Claire, Brianna, Marsali and Lizzie find the MacNeill family in dire straits, struck by a devastating illness. As the same illness strikes other families across the Ridge, Claire tends to them as she can, while Roger sees to burying the ones that succumb.

In November 1774, Lizzie reveals that she is pregnant and the father of her child is one of the Beardsley twins, but neither she nor they know which one. After Jamie handfasts Lizzie to Kezzie, she and the twins go to Roger and ask him to handfast Lizzie to Jo. Their son Rodney is born on April 19, 1775.

Upon Claire's return to the Ridge in spring 1779, she learns that in her absence Lizzie had another son, and is pregnant again.

Upon arriving to Fraser's Ridge as Brianna Fraser's servant Lizzie was infatuated with Young Ian. It was mostly just a crush.

As a result of Lizzie falsely accusing Roger MacKenzie of being the man whom raped Brianna, Ian and Jamie Fraser beat him and send him with some Indians. After discovering the truth, and Brianna now being much further into her pregnancy, Ian traded himself for Roger joining a Mohawk tribe and marrying Wakyo'teyehsnonhsa.

When Ian returned in October 1772, Lizzie was betrothed to Manfred McGillivray. Following the breaking of the engagement Brianna had suggested that perhaps Ian would marry Lizzie. However, Ian explained that yes he could be content with Lizzie and when he woke he'd know where he was - right next to his sister. As a result Ian made no attempts to try and wed Lizzie.

Lizzie was betrothed to Manfred McGillivray for a while. However he called the engagement off when he realized he had contracted "the French disease". Mostly Lizzie was more upset about losing the mother-daughter relationship she'd begun to establish with Ute McGillivray.

During Bobby Higgins's initial visits to Fraser's Ridge on behalf of Lord John Grey, Bobby became smitten with Lizzie though she was already betrothed to Manfred McGillivray. He often sought out her company when at the Ridge and after the termination of her betrothal had, through Lord John, requested to speak with her father Joseph Wemyss about marrying her. His request was quickly dismissed by Joseph, who, out of concern for his daughter's welfare, did not want Lizzie to marry a branded murderer with little in the way of future prospects and stability.

When Josiah and Keziah Beardsley first came to the Ridge Lizzie took on what most would consider a big sister or motherly role. She cut their hair, made sure they cleaned up, and started to teach them basics like reading and writing. The pair became focused on her though not initially in an romantic way. It was said they are like "her tame wolves"[3] with how they follow her and wish to protect her.

Following her broken engagement Lizzie suffered a rather bad attack of malaria while Claire was away. Jo and Kezzie tended to her. As she came out of the attack she woke to find, for the purpose of trying to regulate her temperature, she was naked in bed with Josiah. The two ended up having sex. The relationship continued, the pair finding various times and places to be intimate. Unknown to her it wasn't always Jo that was sleeping with her. Only one time in the barn when she called to Jo as he'd left his hat did she realize - by his lack of response - it was his deaf identical twin Kezzie.

Lizzie could not choose between them, finding them to be like one soul but in two bodies. In November 1774 she had to admit to her pregnancy as she'd begun to show. Her father, Joseph Wemyss, and Jamie were both outraged that she wasn't even sure which of the twins it was and neither were the twins. Claire attempted to console her on this, Lizzie confessing that she'd been with both boys - though initially unaware of that but after she was aware it just seemed natural they'd share her as they share all things.

After drawing straws to determine whom would wed her, Jamie handfasts Lizzie to Kezzie. Jo marks his twin's hand so they cannot be told apart anymore and the trio stole away and had Roger MacKenzie handfast Jo to Lizzie.

The trio welcomed a healthy baby boy, Rodney Beardsley, in April 1775. The child acting something of an olive branch between them and Joseph. Their life style is still frowned upon, but to keep everyone from talking Jamie told the brothers that the pair should not be seen at the same time out and about with Lizzie.

Since their double handfastings and the birth of their first son they have welcomed a daughter in 1777, and another son in 1778. When the Frasers returned to the ridge Lizzie is expecting their fourth child. 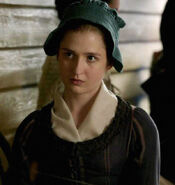