Captain of His Majesty's Eighth Dragoons

Outlander
The Exile: An Outlander Graphic Novel
Dragonfly in Amber
Written in My Own Heart's Blood

1 • 2 • 3
Jonathan Randall, commonly known as "Black Jack", was a minor knight in England during the time of the Jacobite Rising of 1745. He played a part in quashing the rebellion, and was heavily financially supported by the Duke of Sandringham. In 1746, Randall married Mary Hawkins, who bore him a son, Denys. Frank Randall, a historian and husband to Claire Beauchamp Randall in the 20th century, traces his family history back to Jack Randall.

Jonathan was the second son of Sir Denys Randall and Jessica Wolverton.[1] His father was knighted in the late 17th century, and was awarded a baronetcy by King George I.[2] His elder brother, Edward Randall, inherited the family estate in Sussex, while his younger brother, Alexander, became a curate.

In the 1735,[3] Randall bought his commission and served as a captain of dragoons. In late 1739, he became garrison commander at Fort William, succeeding Captain Buncombe.

With a levy imposed on the farms surrounding Fort William to oblige officers with supplies and food for the garrison, Randall and his men were on such a mission in October 1740 when they stopped at Lallybroch, and met resistance from its inhabitants. After hearing his sister, Jenny, in distress, nineteen-year-old Jamie Fraser attempted to defend his sister and his property, but soon gave it up when Randall pointed a pistol at the young woman's head. Randall's men stripped off Jamie's shirt and bound him to their wagon, whence Randall beat him across the back with the flat of his saber. When he'd finished, Randall taunted the sister, inviting her to take him inside the house to spare Jamie. The girl's response provoked Randall into holding his dagger against Jamie's throat. Eventually she acquiesced, and one of the soldiers knocked Jamie out and tied him up in the wagon.

Once inside with Jenny, Randall made some attempt to ready himself to rape her, though as Jenny observed, he experienced some difficulty in doing so. She laughed at him, infuriating him even more, and he hit her hard enough to knock her unconscious, and the men left the farm.

While in hot pursuit of a band of Highland cattle raiders, Captain Jonathan Randall of His Majesty's Eighth Dragoons stumbles upon a woman wandering the countryside in what appear to be her undergarments. Upon hearing her educated English accent, Randall becomes suspicious of her presence in the remote Scottish Highlands. Any further interrogation is cut short when he is knocked unconscious and the woman was gone when he awoke.

Randall meets the woman again some weeks later, when Dougal MacKenzie brings her to meet at an inn in Brockton, and introduces her as Mistress Claire Beauchamp. She explains her situation, which corroborates whatever MacKenzie had told him previously, but he remains highly suspicious of her still. To demonstrate his intention to use whatever means necessary to extract the truth from her, Randall punches Claire in the stomach. This method does not prove effective, however, and MacKenzie takes the woman away again – with orders from Randall to deliver one Claire Beauchamp to Fort William on the 18th of June for questioning. He is foiled yet again, however, when Claire marries a Scotsman, and thus becomes a Scottish subject rather than an English one, and she is sequestered away at Castle Leoch.

Weeks later, fortune drops Claire Beauchamp into his lap once more, when his men bring her to Fort William, having rescued her from drowning in a river. Randall thinks out loud about who she might be working for and why, but draws no firm conclusions. When Claire name-drops the Duke of Sandringham, Randall becomes infuriated by the woman's impertinence, and binds her hands with rope after a brief scuffle. He uses a knife to cut into the front of her gown, exposing one of her breasts. He begins to threaten rape, but makes the mistake of mentioning that Claire's screams will only help him enjoy himself; Claire uses this against him, and laughs at his flaccid penis. He strikes her, but they are interrupted by the sudden appearance of Jamie in the window, pointing a pistol at Randall.

Rather than appearing disturbed, Randall seems delighted by Jamie's arrival. Using Claire as leverage, the captain demands Jamie surrender the pistol, then picks it up and points it at Jamie. When Randall suggests that he intends to continue his assault on Claire, Jamie lunges at him and Randall pulls the trigger – but the hammer clicks on an empty chamber. Jamie knocks him out, and by the time Randall regains consciousness, they have both disappeared.

Months later, in December 1743, it is Jamie that lands before the captain, having been captured by the Watch and delivered to Wentworth Prison, where he was sentenced to hang. Before the execution, though, Randall takes Jamie away to one of the prison's dungeon rooms, where he tortures and rapes Jamie for pleasure. Claire, with help from the MacKenzies and Marcus MacRannoch, successfully manages Jamie's escape from the prison. MacRannoch reports that Randall was trampled to death by the stampede of cattle loosed inside as a distraction.

In the spring of 1744, Claire Fraser runs into Randall at the Duke of Sandringham's residence in Paris. They both suffer a shock, having each thought the other dead since the previous winter, but the more tense encounter is that between Randall and Jamie. Almost immediately, Jamie begins to plan a duel against Randall, which is ultimately foiled by Claire's intervention: she has Randall arrested, claiming he was one of the attackers who molested her and Mary Hawkins some months before, thus preventing Jamie from dueling him.

Later, in May, Jamie encounters Randall once again, this time at the brothel where Jamie had found young Fergus, the pickpocket. Randall, as a paying customer, had chosen Fergus, rather than one of the prostitutes, and upon discovering what had happened, Jamie challenged Randall once again to a duel. They agreed to meet in the Bois de Bologne, a popular location for illicit duels. With swords as the weapon of choice, they fight until Jamie wounds Randall, driving the blade through Randall's groin. Somehow, Randall survives, though obviously not undamaged.

In the autumn of 1745, Randall seeks out Claire in Edinburgh to treat his brother Alexander, who is very ill. She agrees to do so, in exchange for intelligence concerning the English troops.

Jamie awakens on the battlefield with Randall's corpse on top of him.

In 1739 Scotland, Captain Jonathan Randall is assigned to Fort William, taking over from Captain Buncombe. Having learned from his predecessor of Roger MacKenzie's search for his missing son, he sends a found set of RAF dog tags to Brian Fraser at Lallybroch to give to Roger. Roger recognizes them as belonging to his father Jeremiah Walter MacKenzie, who disappeared after his plane crashed near a set of standing stones in northern England.

Roger and Buck return to Fort William and Roger meets with Captain Randall. He tells them that a patrol from Ruthven Barracks brought the dog tags in. He summons the messenger who brought them and has the man give information on where they came from. He asks Roger what they are and Roger tells them it's a charm to preserve the soul. After the man leaves, Roger asks Randall if he will pray with him and though wary, he agrees. To Randall's surprise, Roger takes his hands and holds tight as he prays for Randall's soul.

If there are two sorts of leaders – one who commands the respect of their men, and one who leads by instilling fear – Jack Randall is surely the latter. By all appearances a handsome second son of a nobleman, his carefully constructed public persona completes the picture of a successful officer in the British Army, while it also disguises his darker desires and practices. Described by his creator as a "sadistic bisexual pervert,"[4] Randall seeks sexual pleasure not only by causing physical harm to his victims, but by inflicting the maximum emotional and spiritual anguish in the process. Thus, while he is an equal-opportunity rapist, his position allows him greater access to male prisoners, whose vulnerability and helplessness make their silence more assured than that of any women he might molest.

Jack Randall very closely resembles his descendant, Frank Randall. The likeness is such that Claire Beauchamp mistakes Jack for her husband upon arriving in the past. Though a handsome man like Frank, Jack's skin is darkly tanned from years of exposure and he wears his dark hair long. 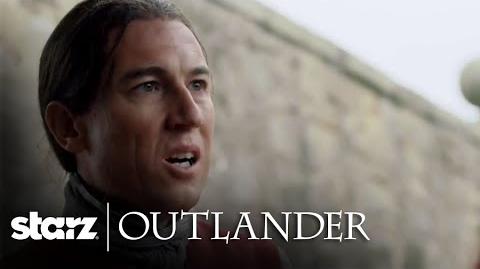