4 • 5
Jocasta Cameron Innes is the youngest sister of Ellen, Colum, and Dougal MacKenzie, and grew up with her siblings at Castle Leoch. She was a very skilled artist, like her sister, before she gradually lost her sight. She has married four men, the most recent of which is Duncan Innes.

Jocasta MacKenzie was born in 1702 to Anne Grant and Jacob MacKenzie. She was their sixth child and fourth daughter.

Jocasta's first marriage was to John Cameron and together they had one daughter, Clementina Cameron, in 1718, before John died of the flux. Clementina had two children with her husband before he too died, shortly before the Battle of Culloden. Clementina and her children later died in the aftermath of the Rising in 1746.

After the death of her first husband Jocasta remarried to her second Cameron husband, Hugh Cameron, who was John's cousin. They had one daughter, Seonag, before he died during a hunting trip, leaving Jocasta widowed again. Her second daughter went on to marry the Master of Garth and they had one child. Seonag's husband died during the Battle of Culloden and Seonag and her children died soon after.

Jocasta's third marriage (to a third Cameron) was to Hector mor Cameron, and as in her previous marriages they had one daughter, Morna Cameron, in 1730. Hector, her brother Dougal, and a third man were involved in smuggling gold for Charles Stuart from King Louis of France. In the end, Hector determined it was too late to be useful to the cause, and they hid it in their home until the end of the Rising, at which point Hector buried it in the woods after taking some for their escape. Jocasta, her husband and youngest daughter, Morna, fled to the coast after she could not convince her husband to go and help her two older children and their families. On the way to the coast, they were stopped by the English and during the attack Hector accidentally shot Morna; Jocasta never forgave him for her death. The two then fled to the American colonies, where they bought a plantation in North Carolina with the gold.

Hector died from the morbid sore throat at age seventy-three, less than a year before Jamie and Claire arrived at River Run to greet Jocasta.

Jocasta's final marriage was to Duncan Innes in 1771. This marriage was to her nephew Jamie's close friend, to ensure that her plantation would be properly run. As a woman, she would need assistance with the estate, and a man would be useful when dealing with the British soldiers in the colonies. Still, there was no doubt that Jocasta would have a hand in running the affairs of the plantation behind the scenes. They were married in a lavish event in March 1771 after a thwarted attempt at the Gathering the previous autumn.

Jocasta meets her nephew and his wife Claire, as well as her great-nephew Ian, when they arrive in summer of 1767.

Jocasta attends the Gathering at Mount Helicon in 1770, intending to wed Duncan Innes, but is forestalled until the following spring when the event finally takes place at her plantation, River Run.

During the wedding celebration, Jocasta is threatened by a mysterious stranger. She later tells the story of how she and Hector escaped Scotland after the Jacobite Rising of 1745 with the help of the Frenchman's gold – and how Hector had accidentally killed their daughter, Morna.

A few years after Duncan Innes had been attacked by him, Lieutenant Wolff has been killed and it is suspected that Ulysses has done so on Jocasta's orders. Who actually dispatched Wolff is unknown but Claire has noted that the fatal wound that killed Wolff was made by someone holding a knife in their left hand. The decision is made to hide the body in Hector Cameron's mausoleum, Jamie's notion being that Hector's ghost will prevent Wolff from haunting River Run.

Jocasta and Duncan host a barbecue in honor of Flora MacDonald. After Phaedre's affair with Duncan comes to light, Jocasta reveals that Hector was Phaedre's father.

By 1776, the estate's finances are in dire straits, owing to the unexplained disappearance of the Frenchman's gold. Jocasta and Duncan flee to Nova Scotia as the tide of war turns against Loyalist factions in the colony.

Jocasta fits the characteristic MacKenzie traits – charming but sly, with a gift for crafting a long game without detection by those that might stop her.

Jocasta is described as a striking woman that exudes a sensual vitality. She is possessed of the broad cheekbones and high, smooth brow that Claire had observed of Jocasta's brothers, Colum and Dougal, many years before, as well as the striking height and presence of her nephew and great-niece. She has white hair with a tinge of ruddiness to it, suggesting that it might once have been as red as Jamie's. When Claire and Jamie first meet Jocasta at River Run, Claire makes note of Jamie's response to his aunt's appearance, and surmises that Jocasta likely bore a great resemblance to her older sister Ellen, Jamie's mother.

In the Season Four episode "Man of Worth," she strikes up a romantic relationship with Murtagh Fraser, a major departure from the books in which Murtagh dies at Culloden. 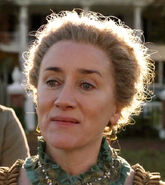 Retrieved from "https://outlander.fandom.com/wiki/Jocasta_Cameron?oldid=41970"
Community content is available under CC-BY-SA unless otherwise noted.