Free Will is the third episode of Season Five and fifty-eighth episode overall of the Outlander television series.

The growing Regulator threat forces Jamie, Claire and Roger to embark on a mission to raise a militia. When one of their settlers reveals he's a bondservant, and asks for help freeing himself and his brother from their abusive master, Jamie and Claire are forced to make a difficult decision.

Inside the World of Outlander Episode 3 Season 5 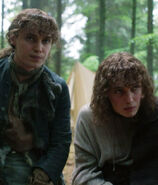