Outlander Wiki
Register
Don't have an account?
Sign In
Advertisement
in: Male characters, Characters in Dragonfly in Amber, Fraser Clan,
and 17 more
English

View source
watch 02:21
Who is Fergus Fraser?
Do you like this video?
Play Sound

Fergus Fraser, formerly known as Claudel, is a French emigrant to the American colonies via Scotland. Born in Paris, he grew up in a brothel, not knowing who his true parents were or if they still lived. In 1744, while Jamie and Claire Fraser lived in Paris, Jamie hired him as a pickpocket and gave him his new Scottish name.

Fergus was born "Claudel" in Madame Elise's brothel in Paris, to one of the prostitutes – he never knew which one, and had no idea who his father was. Madame Elise let him sleep in a closet under the stairs, and he was allowed to come out in the early hours of the morning, when business was winding down, and the ladies of the brothel would sometimes share breakfast with him. He would also brush their hair and "help them with their underthings," of which he was quite proud.

It is revealed later in Dragonfly in Amber that he was molested from time to time by male customers with "certain tastes" – a fact that leads Jamie to challenge Jack Randall to a duel after catching him molesting Fergus.

After running into Madame Elise's brothel while being pursued by attackers in Paris, Jamie spots Fergus (at the time called "Claudel") and asks him for help in escaping. The two manage to get away by climbing up onto the roof, and Jamie later offers the boy a job as a pickpocket in exchange for "clothes, lodging, and 30 ecús a year".[4] He also renames the boy Fergus, as he thinks Claudel is not a very manly name.

Fergus proves to be an adept pickpocket, discreetly stealing letters addressed to Charles Stuart from messengers' bags in taverns, delivering them to Jamie (whom he calls "Milord") to copy, and then returning the letters to the messengers' bags after. From time to time, at Jamie's urging, he also serves as an escort for Claire (whom he calls "Milady") and also accompanies Jamie and Claire to various social functions as a page. Though he can be mischievous (he causes a stir at a picnic at the stables when he tries to ride an unbroken horse, and later in the novel picks a fight with the young son of a lord), he proves fiercely loyal to both Jamie and Claire, and invaluable in numerous times of trouble.

He accompanies the Frasers back to Scotland after Jamie is released from the Bastille, and after living with them briefly at Lallybroch, he is brought along when Jamie joins the Highland army and Claire accompanies him as a medic. After leading a soldier with important information to Jamie on the battlefield at Prestonpans, he inadvertently joins the battle, later lamenting to Claire about killing a man.

When the tide of war turns against the Highlanders and Jamie kills Dougal MacKenzie in self-defense, Jamie sends Fergus on a critical mission: ride to Lallybroch with a deed of sasine, which turns ownership of Lallybroch over to Young Jamie, and prevents the English from taking it should Jamie be labeled a traitor. Fergus is last seen running to the stables to mount Donas, Jamie's horse, and make the trip alone.

Following the Battle of Culloden, Fergus continues to live at Lallybroch, and Jenny Murray tutors him with the rest of her children. He sometimes brings food to Jamie, who lives in a cave near the estate. While making one such delivery, he encounters redcoats who try to steal a cask of ale from him. He taunts them and tries to escape, and one of the soldiers cuts his hand off.

In 1766, Fergus lives in Edinburgh where he helps Jamie in his smuggling business. When Jamie's nephew Ian is taken by a ship destined for the West Indies, Fergus accompanies Jamie and Claire on the pursuit. However, he brings along Jamie's step-daughter Marsali MacKimmie, informs Jamie that they are in love, and the two are hand-fast. In spring 1767, Fergus and Marsali marry in the West Indies and Jamie gives Fergus his own last name, thus formalizing their relationship as father and adopted son.

Leaving Marsali on Jamaica under the care of friends during her pregnancy, Fergus sailed to Georgia, where Jamie and Claire had shipwrecked, in order to travel with them and determine their next moves. In June 1767, they are in Charleston where they witness the hanging of one of Jamie's Ardsmuir men, Gavin Hayes. In July, Fergus goes back to Jamaica to fetch his wife Marsali and their first-born child Germain. They come to Fraser's Ridge in the summer of 1768.

Fergus and Marsali's children Germain and Joan are baptized at the Gathering at Mount Helicon.

Fergus has trouble providing for his family, as being one-handed prevents him from doing many of the labor-intensive tasks that are needed to survive in the backcountry. As a result, Marsali takes on much of the physical labor of tending the whisky still and minding the animals, as well as caring for her four young children, cooking, and cleaning, while Fergus seeks out odd jobs that take him away from home for extended periods, like acting as messenger or translator.

In October 1773, their fourth child is born – a boy named Henri-Christian, who is a dwarf. Some of the residents of Fraser's Ridge believe that the child's condition is a punishment for his parents' sins, and gossip runs rampant in the backcountry. Fergus is ashamed of not being able to protect his family properly and provide for them, and makes an attempt to end his own life, but Jamie stops him in time.

Jamie comes up with an idea for Fergus and his family to move away and start a printing business in a town, as Fergus had some experience with printing in Edinburgh and should be able to work in that role. When news comes that there is a vacant print shop in New Bern, Fergus and his family move in 1774. They soon start publishing a weekly newspaper titled L'Oignon-Intelligencer and Fergus finally seems happy.

In 1776, Percy Beauchamp arrives in America, looking for a Claudel Fraser on behalf of a French nobleman. Fergus learns about those inquiries in April 1777, when Beauchamp comes to New Bern, and decides not to speak to Beauchamp, assuming that the reason for those inquiries can't be good. He is later assaulted by two men, losing his hook and getting bruised.

In mid-1777, Fergus and his family move to Philadelphia, where they open another printshop.

In September 1778, Fergus and Marsali receive threats. On September 18, their Philadelphian printshop burns down and their youngest son Henri-Christian dies while trying to escape the flames.

In late November, Fergus and his family arrive in Savannah. A month later, the British army invades the city, and it isn't safe for Fergus to resume the publication of L'Oignon-Intelligencer.

In early 1779, Fergus, Marsali, and their daughters Joan and Félicité settle in Wilmington. His eldest son Germain returns to Fraser's Ridge with his grandparents, Jamie and Claire, as Fergus and Marsali think that it is dangerous for a boy Germain's age to live in a large city in time of war.

Despite spending most of his life on a farm in Scotland, Fergus retains his "Frenchness" to such a marked degree that no one would mistake him for a Highlander upon meeting him. His haughtiness belies his humble beginnings as a juvenile pickpocket living on the streets of Paris, yet there is something inherently aristocratic about his mannerisms.

As a boy of ten, Fergus is small for his age with black hair, pale, sallow skin, big, long-lashed dark eyes, and large, perfect front teeth that are "square as a squirrel's".[4] His slightly beaked nose and long mouth lend him an aristocratic look, and Jamie notes that the bones of the boy's face suggest he will be a handsome man when he is grown. Jamie's prediction proves a prescient one, as Claire notes upon her return to the past that Fergus has become a very handsome man after twenty years.

At age fifteen, while delivering a cask of ale to Jamie in the cave near Lallybroch, Fergus encounters redcoats that try to steal the cask from him, and Fergus foolishly taunts them and tries to get away. In a small scuffle, one of the soldiers draws his sword and brings it down on Fergus's wrist, severing his hand clean off. As an adult, Fergus customarily wears a hook in place of the missing left hand, or a filled glove when wanting to avoid undue notice.

Fergus's relationship with Jamie begins as one of an employer and employee, but over the years Jamie becomes a father figure to him. In 1767, Jamie formally gives Fergus his family name when he marries Marsali.

Fergus reveals that he is in love with Marsali when he is thirty, and she is fifteen. The two of them conspire to bring Marsali aboard the Artemis, which has set sail for the West Indies as Jamie and Claire set out in search of Young Ian. 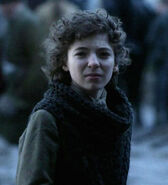